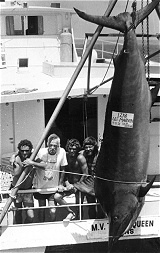 These founding members had united to give a representative voice for the game fishing industry on matters relating to vessel survey and manning requirements.

Thus the CPGFA as it is known today was formed, and as the association developed and the marlin fishing industry grew, conservation issues came to the forefront of members concerns.

With the assistance of NSW Fisheries, the Cairns game fishing fleet implemented a tag and release program, which is recognized throughout the world today. CPGFA, in collaboration with the Cairns Game Fishing Club correlated tag return information and assisted CSIRO in its research into Black Marlin biomass.

In 1980, Vince Vlasoff one of Cairns early tourism pioneers and builder of the underwater observatory at Green Island, off Cairns led the association in a fight against foreign longliners in the Coral Sea. This area which is now known as “Area E” is the only known spawning grounds of Makaira Indicus, the giant Black Marlin. With the intervention of the federal government, the association was successful in a ban on all foreign long lining in this area. In 1988, and in memory of Vince’s contribution to game fishing and tourism in the Cairn’s region, the CPGFA was instrumental in having Little Upolu Cay off Cairns renamed Vlasoff Cay.

During the 1980’s, anglers from all over the world enjoyed the fabulous fishing and diving right along the Great Barrier Reef off Cairns. During this time the association was actively involved in local issues and promotion. In the mid 80’s, the Great Barrier Reef Marine Park was formed, and the association was very involved in the zone planning and associated fishing issues.

As a result of the members lobbying, game fishing in the Cairns area has been recognized as a historical fishery. The 120-day “Game fishing” permit allowing access to the Marine Park during the marlin season is a direct result of the association’s lobbying, 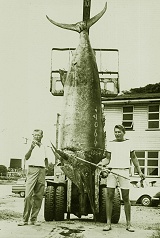 In the early 1990’s, an issue that was to impact heavily on this association and its members came into the forefront. Domestic longlining in the tuna and marlin rich waters of “Area E”. The association was instrumental in obtaining a federal government ban on the commercial take of Blue and Black marlin in the Australian Fishing Zone (AFZ). It was a long, hard battle, and many members worked tirelessly to protect marlin species from longline by-catch. Today, the association’s members and the local long line fleet enjoy a good relationship, sharing information and ideas.

The recent seasons of good fishing, along with the release of many of the large breeding female Black Marlin has proved that this association has had a positive impact on fish stocks and the future of game fishing. With the introduction of modern technology, the association, in conjunction with Queensland Game Fishing Association and the Game Fishing Association of Australia have supported and industry funded both a sonic tagging and tracking program as well as the new “Smart” tags. Satellite tags, which collate information and aid both fishermen and scientists alike in billfish and tuna research.